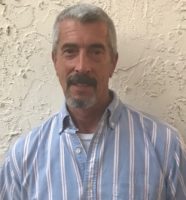 Corey R. Saur was born in Watertown New York the only son of Jack and Marilyn Saur. He grew up in several small communities in northern New York state in the inspiring Adirondack Mountains.

He graduated from Hermon-Dekalb high school and was active several sports activities including softball, basketball, hockey, among others. He is proud of his years in Boy Scouts of America earning his Eagle Scout designation in 1976.

Corey retired in 2018 after twenty-four years with United Parcel Service (UPS). He began as a package handler and held many positions as he rose through the ranks ending his career in management as Operations Supervisor. The organization has a zero tolerance for mistakes and Corey had a perfect record while on the job and only missed one day of work in twenty-four years.

Corey began his career at UPS at the age of thirty-four after having worked in several detail-oriented industries including printing. His talent for logistics and attention to detail served him well at UPS and now at Access Ready.

When you ask others about Corey’s work the words you hear are: Honest, serious, understanding and willing to help.

He states: “Many are confused by details, but that is what often makes the difference. I believe in breaking things down to the basics.”

Corey has six sisters and began working a paper route and shoveling snow for neighbors at age ten.

Now that he has retired and started a second career in communications and logistics with Access Ready, he hopes to help the organization make a true difference. He said: “I want to see where this takes me, that is part of the fun. I understand and believe in what we are doing and want to help all I can to make the organization have the effect that is so badly needed.

One thing I have learned is that everything changes, and we must change if we are to keep growing. This is true for people, organizations and yes society.”